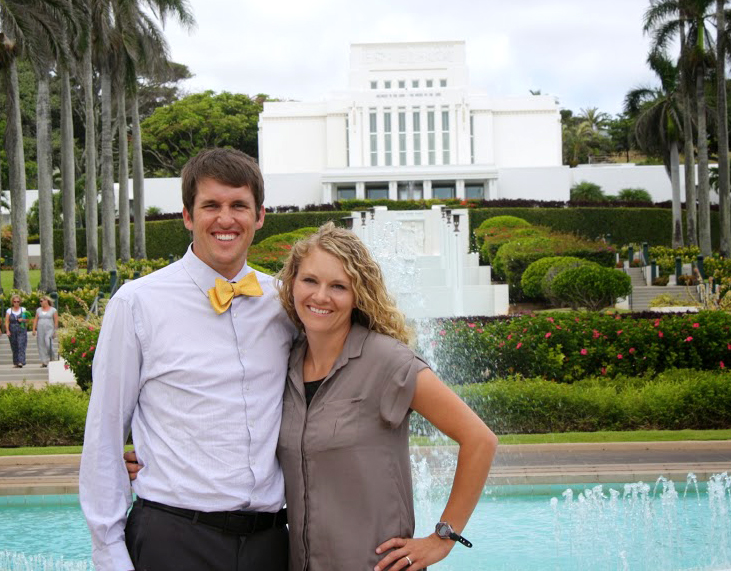 Another picture of one of my gals and her hubby…

Brooke leaned into Sierra and spoke softly, “That fur on his legs makes me want to gag. Plus, the guy is still living in the eighties, look at that head of big hair.”

Brooke still stared at his legs, “He should shave those legs, stuff could get lost in there.”

“If you don’t stop gawking, he is totally going to get the wrong idea,” warned Sierra.

Brooke gave a small yelp, “Ack, he’s coming our way, quick what do I do?”

Rand had detected Brooke staring at him as they trudged through the thick foliage. He couldn’t blame her. He had kept himself looking good all these years. The added weight to his middle was easy to overlook when you took in the whole package, he thought.  He knew women had a hard time not noticing him and that annoyed the men. That must be why Clifford was being such a pesky gnat around the girls.

Brooke was horrified as she watched the arrogant Rand pluck a crimson flower and lumber towards her. He was trying to hold her eye contact and she was starting to panic. “Sierra, help!” she urgently whispered. “Hey, you shouldn’t have been studying those furry legs so long, he thinks you’re interested.” Sierra whispered back.  Brooke’s eyes widened as she watched Rand elbow Clifford out of his way.

Clifford frowned when Rand shoved past him to get to Brooke. The guy has too much confidence in himself, Clifford thought. He was even considering how he might take Rand’s ego down a couple of notches. He started to mull over ways to humiliate the arrogant chump in front of the women.

Rand didn’t care much about the other guys in the group; his focus was on the females, particularly Brooke. Although, he was momentarily annoyed by the sour smell of body odor emanating off of Clifford as he passed him. He would have to work himself into a photo with the two gals and brag to his buddies back home.

As he approached Brooke with the flower she took an almost imperceptible step backwards. It wasn’t lost on Rand and his grin faltered. Rand’s eyes flicked between the two girls assessing their reaction to his attention. He would not lose his nerve. He knew he had what it took to attract the ladies. High School had proven that time and again. The females couldn’t stay away from him back then. The memories brought a faint smile to his thick lips. He never lacked girls asking him out or showering him with attention. These two gals would be no different. He decided that now was as good of a time as any to get to work on the girls. He had a twinge of hesitation as he thought of his ex-wife. Whatever the ordeal was in his ex-wife’s mind he just couldn’t figure out. Jen didn’t realize what she’d given up when she’d kicked him out.

(I have hesitated putting this story on my website…I’ve decided at the age of 55, I need to finish college. So, rather than attending classes all day away from my family, I have decided to earn my degree online. This may very likely take me 8 years. Deciding what to have my emphasis in, was tricky.  I stink at writing….but I want to get good. That is the emphasis I chose. Very scary. It is a struggle to eek out the writing assignments my professors request but very rewarding at the same time. I have decided to share my first attempt at writing, here. Be kind in your critiquing! It is very amateur, but after receiving a high score on this particular piece and the professor asking if I was going to publish it, I decided to take the plunge and expose my attempt at writing. Ya have to start somewhere right?  I will post the short story in segments.)

One Response to Short Story – Part 2


Strict Standards: call_user_func_array() expects parameter 1 to be a valid callback, non-static method easyFancyBox::on_ready() should not be called statically in /home/i77b9ank6tww/public_html/livevivant/wp-includes/plugin.php on line 406