GETTING TO THE HEART OF SAME-SEX PARENTING

NOTE: My son wrote this for an english project and im posting at his request.

According to a recent poll, support for Gay Marriage has reached an all-time high. 59% of Americans now support it compared to a 30% approval that was reported in 2004 (US support). It is incredible how much public opinion has changed on this topic in a mere 11 years! The Argument addressing the pros and cons of gay marriage is about as complicated as it gets. There are many facets to the debate but I will only attempt to address one here. What is the effect of gay marriage on children? There are few things that are more important to society than the health and safety of the rising generation, and so the question must be asked, is it possible that same-sex parenting harms children? As the son of two wonderful parents and as a member of an incredibly supportive and loving family it is important to me, and I’m sure it is important to you, that all children have every opportunity to be raised in the best possible environment.

Because legalizing same-sex marriage is such a recent development (the world’s first legal gay marriage ceremony took place only 14 years ago) It has been difficult for researchers to gather sufficient data to gauge the effect that same-sex parenting has on children. Some of the studies that have been conducted are contradictory. Let’s take for our first example an article endorsed by the AAP. Between 1986 and 1992, 154 prospective lesbian mothers volunteered for a study that was designed to follow planned lesbian families from the children’s conception until they reached adulthood. Data was then gathered using surveys and interviews with the mothers. Using the data the study then asserted that teenage children of lesbian mothers were rated higher in social, academic and total competence than their counterparts taken from Achenbach’s normative sample of American youth (Gartrell and Bos).

In contrast a more recent study, published on Feb 27, 2015 by Donald Sullins, asserts the opposite. For this study results from 207,007 children (512 with same-sex parents) were taken from the U.S. National Health Interview Survey in which emotional and developmental problems were gauged with study controls regarding age, sex, race, and parent income and education. The evaluation found that children of same-sex parents were over two times as likely to suffer from emotional problems and that “Joint biological parents are associated with the lowest rate of child emotional problems by a factor of 4 relative to same-sex parents.”

If you search this topic on the internet you will find literature for and against same-sex parenting with similar contradictory results. What are we to make of this? Well first of all, not all studies are created equal. There are many nuances in the way that a study is designed that can create bias. The scientific method requires a blind, unbiased sampling of random participants in order to produce legitimate results. You will notice that in the first study mentioned 154 lesbian mothers volunteered for the study. Is it fair to compare the parenting results of 154 eager volunteers to the remainder of the entire American population? An additional bias was created in this study by allowing the mothers of these children to transmit the data to the researchers. A proper study, such as the second one mentioned, would have no selection bias and would gather data from the children themselves not from the parents. This example unfortunately illustrates a major current trend in which researchers bias results in regards to such emotionally and politically charged debates such as this.

Loren Marks of Louisiana State University has written much on this problem. According to him, and common sense, only a study conducted with a large random sampling of children from same-sex parents and a large random sampling of children from opposite-sex parents will be able to adequately model the differences between the two groups. If you limit your research to these studies you will find that same-sex parenting doesn’t measure up. It turns out that you can’t fight biology. Kids need female mothers and male fathers.

Some additional statistics from a separate study conducted by Mark Regnerus further illustrate this. His study, which is backed by the NFSS, took special care to avoid selection bias which has been so prevalent in earlier studies. According to his study adult children of same-sex parents were 38% less likely to describe their family of origin as being secure. These children were also over 3 times as likely to have been forced to have sex against their will and were over 10 times more likely to have been sexually touched by an adult. 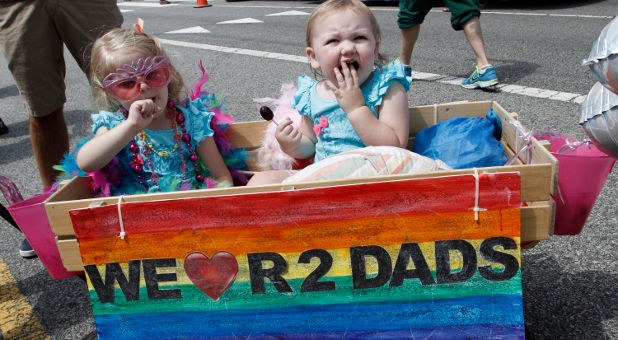 Much of the increased risk for these children is likely due to the political pressure that surrounds our culture in connection with this topic. Is it ethical to use children as political statements?

Be sure to understand what is being said. We are not taking into account divorce/separation rates. Unfortunately family stability for both same-sex and traditional marriage is rare, but that is another argument entirely. Here we are comparing two very specific groups, both of which involve two parents that have been present for much of the child’s rearing years. One group involving same-sex parents and the other consisting of a male father and a female mother. The evidence presented does not suggest that gay parents are incapable of loving their children and it does not mean that marriages between a man and a women always provide a loving, positive environment for children. It means that children of same-sex parents suffer greater odds of emotional struggle in general when compared to children raised in traditional households.

In the words of Katy Faust, a daughter of same-sex parents and an opponent to same sex marriage, “Now we are normalizing a family structure where a child will always be deprived daily of one gender influence and the relationship with at least one natural parent. Our cultural narrative becomes one that, in essence, tells children that they have no right to the natural family structure or their biological parents, but that children simply exist for the satisfaction of adult desires. . . The label of bigot or hater has become very powerful and effective tools to silence those of us who choose not to endorse the marriage platform of many gay lobbyists,” Faust continued. “For much of my adult life I was content to keep my opinions on the subject of marriage to myself. I was (and still am) sickened by the accusation that I was bigoted and anti-gay for my belief in natural marriage. For many years those devices kept me quiet. I didn’t seek a venue where I could share my views. But I have come to realize that my silence, and the silence of others, has allowed for the conversation to be dominated by those who claim that only animus, ignorance, or indoctrination could lead one to oppose ‘marriage equality.’”

Let us cease to be silent.

Some say that same-sex couples have the right to adopt children. They say it is better for a child to have two loving same-sex parents than it is for the child to have one or none. While it is true that same-sex couples have the capacity to love and care for children the most trustworthy research shows that children are generally better off with their biological parents. We live in an imperfect world. Unfortunately it is impossible for us to guarantee a perfect environment for every child. But shouldn’t that be our goal? Isn’t it our responsibility to arrange our laws so that in general children will be protected? If there is any unalienable right that every child deserves, it is the right to grow up in the care of a loving mother and father.